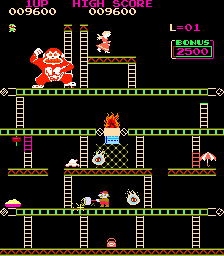 Crazy Kong (クレイジーコング Kureijī Kongu?) is an arcade game created by Falcon, released in 1981 and is similar to Nintendo's Donkey Kong. Although commonly mistaken as a bootleg version, the game is officially licensed for non-US markets[1] and is based on different hardware. The game retains all of the gameplay elements of Donkey Kong, but has all of the graphics redrawn and re-colorized. Crazy Kong is also known as Congorilla, Crazy Kong Part II, and Monkey Donkey.

There are two versions of the original Crazy Kong and Crazy Kong Part II; the differences of which are in minor cinematic artifacts and bugs, color palette choices and minor gameplay differences. Crazy Kong Part I shows no copyright or company name on the title screen. Crazy Kong (parts I and II) runs on modified Crazy Climber hardware. In addition there are other versions of the game that run on Scramble, Jeutel, Orca, and Alca hardware. The official versions of game came in two different stand up cabinets that featured a large and angry, rather than comic, ape embedded in the artwork. The cabinets were created by Zaccaria.

The title screen of the game features either the text "Crazy Kong" or "Monkey Donkey" written in girders dependent upon which version is running. There is no graphic of Kong on the main screen. No copyright, just the year '1981'. The girder text does not flash different colours for a few seconds before stopping, as in Donkey Kong.
The color palette has been almost completely changed; Part I and Part II have different palette choices.
Some of the game graphics have been re-drawn; while Donkey Kong looks almost the same from a side view, his frontal appearance is noticeably different when he opens his mouth; he is taller and much more fierce looking.
Many animations are removed. For example in the classic first level, barrels appear from Crazy Kong, as opposed to showing the rolling animations. He is locked in the horizontal roll animation but does not reach for the other barrels or move when rolling barrels vertically. Frames of animation are also removed at the beginning and ending of each level.
The sound effects are altered and are generally more crude sounding. The background humming music is removed and Mario is given a digital sample "hi-yah" sound when jumping. A lot of the in game sounds such as the "Kong chest beating" can also be found in the game Crazy Climber on those versions that run on its proprietary hardware.
Aspects of the game are considered slightly more difficult than Donkey Kong because the collision detection is less forgiving and certain mechanistic elements of the game move faster.
The first level can be completed with the following cheat: Climb up the ladder at the far right of the bottom platform. Make sure Mario’s back is facing you while tapping the joystick until his right foot is hanging over the ledge. Jump off the platform. If done correctly, he’ll drop through the floor below and the level will be completed.
The ghost-like flames that inhabit the 100m mark (the rivet level) are replaced with the oil-fire enemies that inhabit the other levels.
After completing the 100m mark, the heart that would normally exist between Mario and Pauline is positioned right near the round indicator.

Differences in Part I

When entering a high score, any character of the 12 allotted that is not used will be replaced with a dash (-).
Most of the steel girders have been switched from a magenta/purple color to a neon green color, including the title screen.
Mario wears the brown and muddy-red colors similar to those that are shown in the original Super Mario Bros., except in the 100m level, where he is shown in a corrupted orange and green palette.
The sounds are entirely composed of ones taken from Crazy Climber.
On the 100m level, it is possible to touch and walk past Crazy Kong without losing a life.

Reviewer: Leonel_VHS - favoritefavoritefavorite - September 13, 2016
Subject: Not bad...
...for a DK clone. It does miss a little bit of the original's charm. But sometimes, beggars can't be choosers.